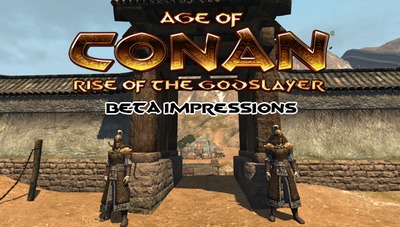 It's an exceedingly rare feat when a game company, particularly a maker of MMORPGs, manages to capture the spirit and substance of a pre-established intellectual property. The landscape is littered with many a well-intentioned but misguided attempt at bringing a beloved novel, film, or multiverse into the realm of video gaming. While Funcom's Age of Conan suffered through a launch that contained a generous helping of bugs and negative forum buzz, one thing the game has always done well is transport the player into a lushly realized digital Hyboria, where lore and Howard references abound for those who care to look.

As we draw nearer to the May 11th street date for the Rise of the Godslayer expansion, Massively has managed to snag some time at the controls of the beta client, and we're happy to bring you our impressions of life in the eastern wilds of Hyboria. We touched on the extensive feature list for the new expansion in our earlier look from GDC as well as our Craig Morrison interview, so this time around we'll focus on the major mechanical addition, the AA system, as well as the general look and feel of the beta.

Walk this way for more on Khitai and the new mechanics and be sure to check out the gallery below.

Happily, the new Rise of the Godslayer expansion pack, the game's first, continues the tradition of immersive world-building begun by the original game as it expands the explorable area to the Far East and the oriental-flavored lands of Khitai. My first steps into Hyboria's eastern kingdoms were through the Gateway to Khitai, a large zone catering to adventurers between levels 20 and 40.

The Gateway to Khitai

It's hard not to notice the sheer size of the new playing field. Standing next to the smoldering carcasses of a wagon train and its horses, butchered by Hyrkanian reavers, you can look across a vast rock-strewn steppe and make out the majestic Great Wall in the far distance. After exploring the area, filling up on new quests from the survivors, and slaughtering a few of the aforementioned raiders as they dynamically spawned near the wagon, it was off to the Hyrkanian camp, a quest hub and pleasure palace serving as the headquarters of an invasion force into the Khitai outlands. From there, it was on to the spooky Hyrkanian graveyard, as well as trips around the zone to diverse locales including massive slave-crafted ruins, camps of the mountain-dwelling beast men known as Zang Xin, and the village that lies just outside the Great Wall.

The Gateway zone, and all of the expansion, boasts Age of Conan's trademark production values, including gorgeous visuals and a delectable far eastern soundtrack. Funcom has crafted some impressive eye and ear candy that will please not only Howard fans but also anyone who has ever wanted to wander through an approximation of a Kurosawa film. Ambiance and atmosphere has never been done better in the massive genre.

While atmospherics and style definitely count for something, I'm sure most of you are reading this in anticipation of finding out how the new content plays. The short answer is... markedly similar to the original game, as there are no sweeping changes to combat, crafting, or general gameplay but rather, a series of considered additions and improvements. Along with a wealth of new quest content and explorable area, Rise of the Godslayer should keep newbs and veterans alike entertained for quite a while. The longer answer needs to be broken down a little bit, and also a qualifier needs to be offered stating that I have not experienced the entirety of the expansion's content, deadlines being what they are. What I have done is given the new 20 - 40 Gateway zone a pretty good whirl, doing a bunch of quests and tinkering a bit with the new AA system.

Aside from the considerable amount of new content, the other raison d'être for any expansion is of course progression. What would an MMORPG be without a way for grind fans to grind, and game companies to dangle carrots, right? While this is an unfortunate fact of genre life, Rise of the Godslayer at least eschews the traditional raised level cap for a form of grindin... er, alternate advancement known as, wait for it... Alternate Advancement, or AA. Progression hounds can belly up to the AA bar, where they'll find a plethora of new drinks on the menu in the form of additional feats, abilities, and perks that differentiate your character from the standard fantasy cliches.

The AA system is essentially used to give your character new abilities, and to give level 80s a reason to keep playing. While I've never been a fan of progression, Funcom deserves some credit for expanding it laterally rather than vertically, and making some of the new AA abilities available to characters who haven't yet reached the level cap. Ability customization is a buzz phrase that many other companies use, but with Rise of the Godslayer, Funcom has actually delivered something more than a marketing bullet point. Also of note is the fact that the new system features an offline/time-based component much like the recently released offline leveling system on the live servers. Making use of it is as easy as getting your character to 80 (required in the current beta build) and selecting the ability you'd like to train along with the 'Time' (as opposed to 'Points') box at the bottom of the AA window. If you're thinking EVE Online's skill advancement system here, you're not far off. Be aware, though, that time-based leveling takes a loooooooong while.

The AA system features three new trees for all classes with approximately 50 new abilities available. Most of these have up to five ranks, so there is a fair amount of originality possible when pairing this new system with the pre-existing feat trees. As with any class/level system, there will inevitably be favored builds, but as it stands at this early stage, there's a lot of room for experimentation. Currently there is no AA cap, so players will eventually be able to acquire all of the new abilities over a presumably lengthy period of time.

The General tree is available to everyone, the Archetype tree is Mage, Soldier, Priest, or Rogue specific, and the third tree is unique to each class.
The General tree unlocks at level 20, while the Archetype and class trees require your character to be level 80. Once each tree is unlocked, players are able to spend AA points in order to acquire the various abilities therein. These points are awarded in three forms: Prowess (PvP in the form of general player killing as well as minigame completion), Mastery (PvE in the form of mob killing and quest completion), and Expertise (awarded at a fixed ratio alongside the previous two).

As content is completed, the player accumulates AA XP, viewable on the XP readout at the top of the AA window. When the XP bar is topped off, you're given Prowess, Mastery, and Expertise points to spend as you see fit. Funcom has deliberately avoided assigning higher point costs to certain feats, and while Prowess points cannot be used on Mastery abilities and vice versa, Expertise points may be used on any ability.

The abilities themselves are broken into two categories: feats and perks. Feats are passive abilities that are always on, though some of them may generate an ability that must be activated via hotbar, key press, or mouse click depending on your UI preferences. Perks, meanwhile, are abilities that must be slotted on the Perk Bar and present something of a strategic choice to players when kitting their avatars out for battle. Those of you familiar with ArenaNet's Guild Wars will no doubt recognize the inspiration for this new system.

Perks may only be exchanged when out of combat, so you'll want to plan ahead depending on the enemy mob (or player) you're likely to encounter. The Perk Bar itself is a new addition to the UI, and overlays the left hotbar by default. Players can mix and match perks based on the number of slots they occupy on the bar, with more powerful perks taking up more slots, and vice versa.

No expansion preview would be complete without a mention of performance. The good news is that the lands of Khitai are absolutely stunning. Each zone is positively drenched with detail, atmosphere, and intrigue. The other news is that frame rates weren't the greatest, and I did experience a few client crashes, neither of which were remedied by upgrading drivers (though fps did improve when I turned the details down). I hesitate to call this bad news for two reasons, the first of which being the obvious beta caveat. The second is that my hardware is getting a little bit long in the tooth. My setup was originally built just prior to Age of Conan's release in May 2008, and it also features a frame-rate crushing 30-inch monitor. Those tidbits, combined with the beta disclaimer, compel me to hold off on being too harsh with Funcom for the performance issues, though they will bear watching once the official release date is upon us.

In the final analysis, my time with Rise of the Godslayer has essentially confirmed what Funcom has been saying for weeks. It is a labor of love, and the effort shows in everything from the amount of new content, to the considered and varied advancement options, to the high production values. Age of Conan may never win back all of those folks left with a bad taste in their mouths over the game's rocky launch, but at the end of the day it doesn't really matter. They've got a AAA game, a AAA expansion, and both look primed to provide hours of entertainment for Conan and MMORPG fans.